Brutus Rating:  2 knives in the skull out of 10. There aren’t really a variety of options for easy dickery to your opponents beyond the regular subterfuge.
Pairs well with: Pint of ale from a tankard. 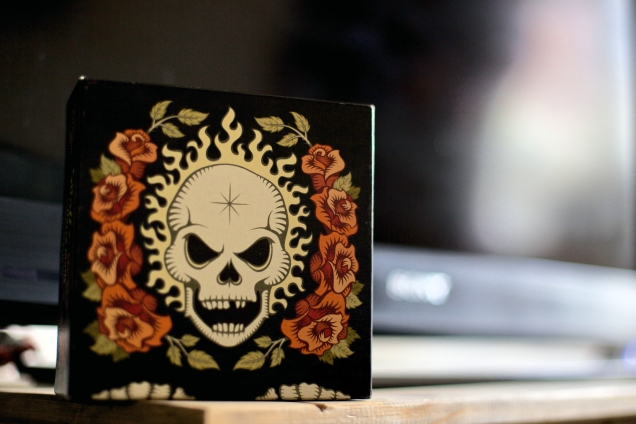 The ratio of complexity of gameplay to complexity of strategy can be a good basic indicator for how good a game is. A lot of really good fun can be found in a game if it has some fairly basic steps and mechanics, and is fairly easy to learn, while also leaving room for a relatively more detailed, complex and developed strategy. Less fun can be had, sometimes, for a game that has a lot of detail in the play but not so much wriggle-room for thought-out plans for victory.

This isn’t meant to be a perfect recipe for board games, of course. Sometimes you want to just sit the heck down and let the board game adventure and some luck take you wherever you’re headed. Preferably to victory. Other times you want to get really deep into the nitty and gritty mechanics of a game and work for your delicious glory that way.

But the play-complexity-to-strategy-complexity formula can still be replicated in a lot of games, including some of the smaller and quicker ones. A good small game is often one that you pick up quickly, has maybe a limited amount of possible ‘moves’, but still lets you develop some excellent strategies for exactly how to play. One of these games is the topic of our review today!*

Skulls is a great game for everyone. After all, everyone has a skull. It’s also pretty damn simple, but you get to develop sneakier and better tactics the more you play.

You’re a member of a biker gang. That’s right, time to whip out the old leather or denim jacket and… I’m not sure, start making motorbike noises and talk about how you miss the feel of the wind in your hair? Presumably that’s what bikers do. You’re competing to become what the rules call the supreme leader. Apparently, biker gangs are run just like North Korea. You learn something new every day! 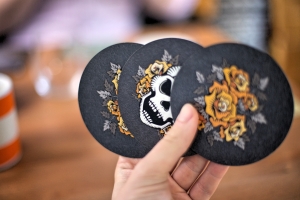 Once you’re done with the formalities of pretending to mistake some of the ‘cards’ for actual beer mats and getting yelled at by the person who owns the game, then you’re ready to begin. 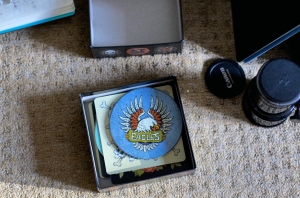 It’s a short game, and it’s a game of bluff. Everyone takes turn placing cards down in front of them (insignia side up, or the bluff part won’t be very effective) and definitely remembering whether you’ve put down a rose or a skull. Eventually one person will decide that instead of putting down a new card they’ll ‘bid’ on how many circular beer mats they can turn over without finding a skull. The trick is, whoever wins the bid (and therefore actually has to attempt to do so) will have to start with their own beer mats first, and starting from the top. Getting it right will lead you halfway to victory (counted by flipping over your square beer mat) and the penalty for getting it wrong is a good mocking and removal of one of your four cards, making it more difficult for you to play. (Particularly if you lost four times… having no cards makes it very difficult to play indeed)

So what you DON’T want to do is forget that you put down a skull and then knob yourself over by bidding as high as possible. Unless you’re trying to lure everyone else into a false sense of security with your incompetence so that you can sweep them all away in the next few rounds. The brilliance of this game is that shit like that can actually happen, and maybe even work!

It’s all about trying to trick everyone into thinking you’ve got a rose when you’ve got a skull, and into thinking  you’ve got a skull when you’ve got a rose. And this isn’t just done by plain old conversation: “Hey you should definitely pick my card. I’ve just put loads of roses down. OR HAVE I?” because, you know, that would be silly. It’s also bluffing through your actions. Bidding really high to convince people that you do have roses, just to have the bid snatched away from you at the last second (just as you’d planned!) so that the winner of the bid will pick your card, convinced that you wouldn’t have done that if you’d had a rose, only to fall down crying when you flip it over to reveal your cunning bluff. TAKE THAT, RICH! YOU NEVER SAW IT COMING! WHO’S YOUR DADDY?

It’s also a very reactive game. Because it fits in that part of the collection for small games, ones that you can fit between other games or when you’re busy, and ones that you can play anywhere because it doesn’t have many pieces, you’ll find yourself just intending to play a quick round of it before you start up the Battlestar Galactica or the Eldritch Horror and then realise, an hour later, you’re all still in the kitchen desperately trying to stop Sophie from getting a fourth victory in maybe six games.

“AHA! Well, Will clearly has a rose because he tried to encourage us to pick his cards” 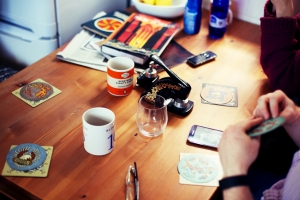 “AHA! Rich definitely has a skull because he was pretending to deliberate, and there’s no way he would have actually been deliberating about bidding higher than five at this stage because that would be MADNESS, so he must have been pretending to deliberate to trick us into thinking that it would be an option for him and to trick us into thinking he has a rose!”**

“Just… never trust Sophie, guys! She’s going to have a skull, she always has a skull! She…. NOOO!”

The spurt of victories from Sophie was quite the surprise. We actually started to wonder if she’d been playing the really really long game, faking incompetence in previous games just to finally show her colours as a ruthless bastard in Skulls and Roses.

All in all, the developed bluffery from Skulls and Roses makes for a great small game, and ranks it pretty well in the ratio of complexity of play to complexity of strategy. Sophie may have played us all for fools but, as always, the real winner is board games.

And Lily the dog.

*You’d bloody hope so wouldn’t you, or else what have we been rambling on about for the last few paragraphs?

** Take our word for it, this paragraph definitely makes sense to Skulls and Roses aficionados.

Credit goes to our photographer friend for, of course, the photos. Huzzah!

One thought on “Skulls and Roses: The lesser known 80s band”