Pairs well with: Space whiskey for the humans, some kind of oil-based fuel for the toasters

In a fit of hostility we’ve decided that it would be a great idea to take on a traitor game two weeks in a row. Who can say why? Perhaps because once you’ve started stirring the resentment-pot then you might as well keep going until you have a delicious broken-friendship-soup. Or perhaps it’s because games with a traitor mechanic are bloody brilliant.

As far as traitor games go, Battlestar Galactica is one of the greats. A familiarity with the television series isn’t necessary, but is a good idea regardless of your position on board games since it’s pretty damn good. (What’s that? Strong female characters? More than one?! Don’t mind if we do!) As such, we’ve always found it a good game to whip out with a group of friends no matter their gaming experience or level of nerdiness. We have all kinds of gateway drugs board games here. 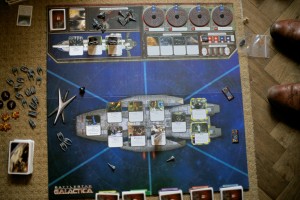 A willingness to play along when it comes to shouting at each other always helps, though. Like with a lot of traitor games, a lot of the real fun comes from player interaction, rather than clever mechanics and strategies. But that’s good, and there’ll always be space for those sorts of games too in our board game collections. Be wary about playing it with a room full of very quiet people though: we’ve all had mishaps where we have been the only person in the room accusing, thinking ‘maybe if I get this going, everyone will join in…’, when ultimately the room silently and awkwardly judges you. We have instead worked out through trial and error that you will require at minimum of two louder people (three if possible), who are poised and ready to create a shouting, energy-fuelled, accusatory positive feedback loop between themselves. As they get louder, and the claims get wilder, the other players in the room are drawn in like the event horizon of a black hole.

It doesn’t even matter if their accusations are true – say literally anything to gain the room’s unyielding attention. ‘I put it to you could have stolen that cargo before you baked the innocent unicorn into the birthday cake!’

Continuing, the theme is a really well-done sample of the well-trodden trope of “human-makes-artificial-intelligence. Artificial-intelligence-thinks “fuck-this-I’m-a-mother-fucking-bad-ass-robot-I’m-having-you-all-for-breakfast-except-I-don’t-even-eat-meat-because-I’m-a-robot-so-I’ll-just-kill-humanity-and-mount-your-squishy-heads-on-my-wall-as-a-trophy””. Humans are the “good guys” (say The Humans) and Cylons (or “robots” or “toasters”) are the baddies. There tends to be one or two toasty traitors per game, depending on numbers, and traitors will discover their role secretly with hidden cards that are given out at the beginning and in the middle of the game.*

No matter how much you sit your friends down and tell them to please, carefully read the page in the instructions about what to do if you’re a Cylon, and please all make sure that you understand it all and ask any questions before the loyalty cards are handed out and the game begins, there’ll always be one person who picks their loyalty card, looks at it, looks uncomfortable for five minutes and then has to meekly ask to see the rulebook and shiftily hide which bit they’re reading. This is not a subtle Cylon strategy and we recommend avoiding it if possible.

One downside that this game has, (at least, nobody we’ve ever played with has seen it as an upside, that’s for sure) is the way that it deals with certain numbers of players. Camelot, for example, makes the brave move of always having only zero or one traitor per game, no matter the number of players. (It also leaves you with this nifty ability to introduce and lose players mid-game if people suddenly want to join in- genius!) Battlestar has this determination to balance things out, which maybe goes a little bit too far. The Resistance does this to a lesser degree, but still it’s super fucking difficult when everyone is shouting ‘BAD GUY’, and half of the room actually is…

More players (5+) means more Cylons. Fair enough! That can be kind of fun. There are still more good guys than bad guys and there’s an extra level of fun you can have with two Cylons working together to defeat the pesky noble humans.

Playing Battlestar with 5 players is excellent! Two Cylon traitor cards and a lot of fun. Playing Battlestar with 3 players is pretty good too, one Cylon traitor and still enough people for a bit of the ol’ shouting and accusing. With four or six players the game starts worrying that maybe it needs to add more bad guys but also there aren’t enough players for more bad guys, so it says “Shit! We’ll introduce this sympathiser to add instead!”

A team that’s getting along fairly well might find themselves trying, on purpose, to lower a resource to a required level so that the sympathiser that’s about to be chosen will side with them. How does that translate into plot? It doesn’t, it definitely doesn’t.

“Why are you chucking all of that food out of the airlock, Sir?”
“Oh, I was hoping that if we get a food shortage then the Cylons will start to take pity on us.”

Is there also something a little shitty about being a regular Cylon who only gets their traitor card halfway through the game? After you’ve been trying so hard to stay alive this whole time? Maybe, but that does kind of work as a mechanic. You realise your programming, you realise you’ve just been trying to blend in with the fleshbags and earn their trust, and now it’s up to you to make them pay.

The plight of the humans is pretty damn difficult anyway, as it should be in any co-op game. You don’t want victory to come easy, you want all of your games to be a painful and horrible slog, clawing hopelessly at all your resource dials and trying to stay just about afloat in time to reach the end of the game. Our photographer bought this game over one evening when we’d requested a “small-to-medium sized game”, and he insisted against Lizzy’s protests that it would totally be fine. Several hours later he confessed that, actually, it was just so rare that he’d survived long enough during a game that he barely knew the full length of it.

Perhaps Lily the dog had the correct tactic when she just waltzed in and knocked everything over. Good girl, Lily.

The gameplay itself has two important rules that aren’t mentioned explicitly in the actual official rules set. Firstly, whenever someone does anything it’s important to determine why, assume that makes them suspicious, and to yell at them for probably being the traitor. This is particularly the case when it’s something that you know they had no choice over.

“OH! You just happened to draw THAT random card, huh? Just what the Cylon would do.”
“OH!! You’re going to the bathroom NOW, huh? Seems like you’re all too keen to convince us of your human functions, huh? cough cough CYLON”
“I saw you touch the toaster this morning, to get toast huh? Lies. You don’t like toast. More like communicating via instantaneous up-link the invasion plans back to the general!”

Appropriately for a team of misery farmers and their friends we ended up losing from too much misery. Losing any one of your four main ‘resources’ will end the game. It’s pretty clear how this works in terms of running out of population (“Guys? Where is everyone?”), food (humans need that to survive, apparently) and fuel (“Ok, ok, we’ll just float around in space… let’s see…”) but it’s not as clear what’s happening when you run out of morale. Mass apathy? Everyone just goes to their room and has a little sulk? Riots, perhaps?

Whatever it was, it got us good. It was an apt representation of our real life selves, as Sophie was just starting to fall asleep in the corner.

It’s a great game for several players and several hours, as long as you have a good team of people keen to accuse each other. Good luck, brave humans. Get your accusatory pointed finger at the ready.

*of course saying that traitor cards are handed out in ‘the middle’ of the game is a generous but loosely-used description. It’s the middle of the game in theory, if the mighty humans are heading for a full game and a victory. It is, unfortunately, also possible for the game to not even reach the point of handing out the second round of cards before humanity gets blasted into oblivion. It maybe wouldn’t be too shocking if this happened when there aren’t even any traitors on board yet.

Credit to Adam “Not the cylon for once” Photographer-friend for the photos. (Usually about 50% game and 50% hamster these days)

2 thoughts on “Battlestar Galactica: or ‘how to legitimately take out all of those secret grudges you had on your friends with bullying and wild accusations’”