Have you ever wanted to be a space pirate?

Of course you have, why did we even bother asking. Well this game isn’t for you. This game is for the people who want to live on the right (ish) side of the law, piloting glorified piles of scrap-metal held together with prayers and duct tape through the far reaches of space, shipping cargo from one end of the galaxy to the other at the mercy of reavers and smugglers and so on.

To be honest though, even the space-pirate aficionados would probably have fun playing this game as it is, to use the technical term, ‘a right laugh’.

Galaxy Truckers is a deceptively smart yet utterly bonkers tile placement game in which every player must build their own beautiful, sparkly spaceship from a range of components. Once built, you’ll experience a series of random encounters per round that will test how well you have planned and built your ship.

The moral of this game is that you are, in fact, not very good at building spaceships. Yes, even if you try really, really hard. Even if you nick all of the components that another player wanted. At some point parts of your ship are going to be blown off, you’ll lose cargo and crew, and you’ll fail to sell any goods at the end of your ship’s whole eventful ordeal.

The game is played over three rounds, as encounters in each round become progressively more difficult. To account for this, you can build bigger and bigger ships1. The round begins with frantic ship-building. A pool of tiles is placed face-down in the centre of the table, ostensibly within easy reach for all players (but in practice it always feels like everyone else is closer to the good tiles). All players simultaneously pick tiles one at a time from the pool and place them on their boards as ship-parts. 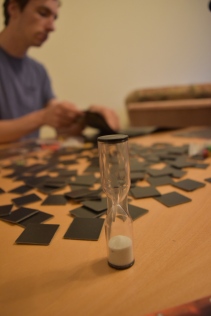 This stage looks and feels a bit like a manic, grabby version of Carcasonne, except that it’s possible to return tiles to the pool if they won’t fit on your ship.

The aim is to build a ship that will fly out of miscellaneous bits and pieces, survive pirate attacks, and carry valuable space-goods to space-market2. Components must marry up with one another in order to have a legal ship that can actually fly (so as well as the tussle for good tiles, players are also simultaneously putting together a puzzle), and will need include several component types to be able to earn you some sweet, sweet money. Engines are pretty essential, without them you would endlessly drift through space. As are storage facilities. Lasers are also quite useful, as they can shoot down hostile space pirates and small asteroids which would otherwise damage your ship. Shields, similarly are helpful for asteroid protection and for when you bump into stuff. As well as these you can build quarters that provide you with crew, battery cells that fuel lasers, shields and engines, and alien habitation units x 3.

All the tiles are useful, is what we’re saying. But in their own special ways, and only when strategically placed (a challenge, given the aforementioned building-panic). If you were, for example, to build a mighty ship replete with enormous weapons and powerful engines, it would not do you much good to place those engines behind the exhaust ports. That is how you get an exploding ship. Similarly, you want cargo holds to be hidden deep in the bowels of the ship, out of harm’s way.

The poor placement of tiles, though useless to that particular player, becomes the hilarious for everyone else.

In the end you (perhaps unsurprisingly) end up with a ship that looks an awful lot like a 7-year old child’s desperate attempts to construct a flightworthy vessel out of macaroni, aluminium foil, and a cardboard box. But you are a noble, brave space trucker on a mission and on a deadline, so off you go. Galaxy Corp, Inc., your shady parent company, are not paying you to lollygag around. Any ‘illegal’ or unfinished bits of ship are assumed to fall off or burn up in take-off, so particularly unlucky or unwitting players may end up with just an engine, a laser, and some pipes. Others, like Chris, have played this game so many times with and without expansions4 that he can build an efficient spacecraft replete with 360 degree shield-coverage in his sleep.

‘Have you seen John’s ship?! It’s just a million batteries tied together with some string. There isn’t anything for the batteries to even power. There’s only one engine and its stuck on the front. John I can’t wait for you to meet our good friends the asteroids.’

You might think that the mad ship-building is a game in itself, and you’d be right, but there is also the small matter of actually flying the damn thing. Bonuses are paid for a speedy delivery, but any *cough* merchandise you pick up en route is yours to profit from. A particularly good-looking ship will also win prizes, but that’s probably not something you would want to bank on, given the gamut of asteroid fields, pirates, and slavers standing between you and your destination.

Of course, if you happen to lose any tiles from your ship on the way, you are technically losing company merchandise, and will unfortunately have to pay for it. This may result in bankruptcy, starvation, and, ultimately, death. A suitably miserable game after all!

But, as ever, the real space bad-ass is board games.