This week we bring you the next in our sporadic series of event reviews, in which we bravely leave the house to give you an exclusive report from one of the hottest board game conventions in … a little area north of Southampton, England. 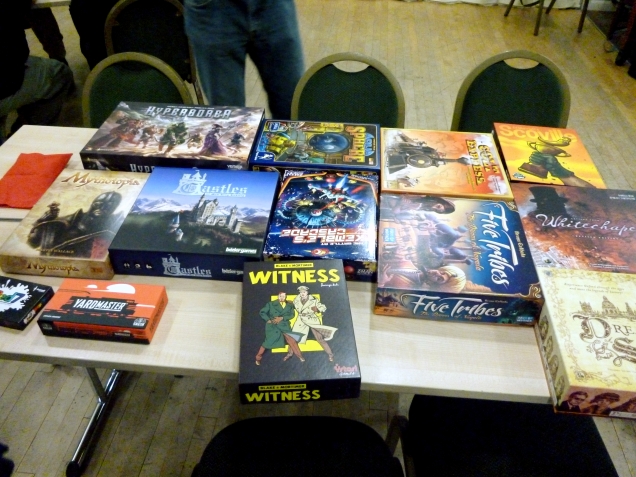 Ok! Perhaps, more accurately, we bring you an exclusive report of what it’s like to host a small board game convention between friends. Apologies for the lower quality photographs than normal, Dr Photographer (link) decided he’d rather spend the convention ‘having fun’ and ‘playing games’ than working for us, for free, all day, so most of the photographs have been taken by Lizzy. At least this time she remembered to wipe the lens of her digital camera first, instead of just getting confused as to why all of the photos were blurry.

Gavcon (lovingly called Gaviscon* by everyone except the eponymous Gav) is the now-annual convention run by one of our good buddies we went to Essen with in 2013. A year later Gavin ‘went rogue’ and, while wildly shouting “I don’t play by your rules!”, tried to save on his yearly trips to Germany by hosting his own mini-convention, for about 20+ people, friends and friends-of-friends. This is our report from the second annual Gavcon!

Gavcon is unlike any other small (or large) conventions we’ve been to, but it seems to work really well. The host, Gav, charges everyone about £30 (that’s about 40 euros, 45 USD, 12,500 Hungarian forints, etc). In exchange for this unusually large sum for a convention he will book a hall and buy one game for each paying participant.

So suppose he gets 12 paying participants. He sets up a list on BoardGameGeek where everyone nominates and votes for the games they want to be able to play; we often pick new releases, things we’ve not played before but heard about, recent recommendations. Based on votes, variety and availability Gav will pick 12 games to buy and bring them all to the convention. There’s a full day of merriment, playing, food from the bar, seeing your friends who inconsiderately moved to Cambridge but are down for the convention, etc.

As the day wraps up, maybe 5pm, the real game begins! Gavin will have the names of everyone who paid their £30 on a piece of paper and in a hat. One by one a name is drawn, to applause and envy, and everyone will get to pick one of the games to take away and keep! Hopefully throughout the day people will have played a wide enough variety of games to make sure they can choose something they like, and if not they can get by on recommendations from others.

Now for the low-down on this year’s Gavcon from Lizzy, our Chief Gavcon Correspondant.

The first trick to running a small games convention, it would seem, is to pick the location very carefully. You need the space, you want somewhere that sells beer and food, but most importantly you want it to be both conveniently close and incredibly difficult to find. Gavcon meets each of these criteria, hosted just north of Southampton while simultaneously being in the middle of nowhere at all. Even when you can see the building, somewhere in the woods, it will take the driver at least ten minutes to find the entrance to a carpark. This is an important part of convention scheduling; you want the players to feel like they’re warming up, being challenged, playing their first game, getting their first victory in before they’ve even arrived.

The first game we started off with was Red7: a small and quick card game, but with some fun mechanics. It consists of the numbers 1-7, each in seven different colours.

To play, you have a choice of putting a card in front of you or in the middle. Cards in front of you will add to your ‘palette’, which is where you get your points from. Cards in the middle will… completely change the rules of the game, depending on which colour you’ve chosen! After you’ve played your turn, either changing the rules, adding to your hand or both, you need to be winning. If you’re not winning after your turn, you’re out! The round will end fairly soon and everyone will count up their score and start again.

The game is quick, easy to learn but great fun. A very good ratio of interesting tactics to difficulty. Recommended as a neat small game. 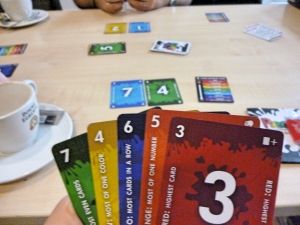 Have you played Suburbia? Good. Well, it’s that game, made by the same people, but better. You have to build the best, maddest castle for the Mad King, with the rooms that become available to you. There are lots of ways that a room can score you points, and lots of exciting combinations you can work towards.

It’s another great one for interesting mechanics; each player takes a turn being the ‘master builder’ and decides how much money each room will cost the players to buy. They’re incentivised to make the more attractive rooms as expensive as possible, since everyone will pay them the money for the rooms.

Slightly more complex, but good fun. It’s great to play a game where you can see several paths to victory and you have to make a tough choice about which one to take.

Oh hell. I don’t even know. The day made sense earlier, what happened? Help!

Witness is a… surprising game. I don’t even know. What did they just say? Shit. It’s a combination of Chinese whispers and a puzzle game, and I don’t know how a group of four smart human adults could be as awful at it as we were. There’s a lot of information to memorise and you’re not allowed to write it down until the end. You’ll find yourself reaching over to whisper to someone and suddenly realising you’ve forgotten all of the names of all of the participants. There’s laughter, there’s tears.

A very quick game which gave us a lot of fun, but we’re not sure how much we’d want to play it after the first few runs.

This was, to Lizzy, the most fun game of Gavcon. Since seeing a review for it she’d been mega-keen to give it a go, and voted for it to be a part of the convention both years. This year she was successful and she wasn’t going to miss the opportunity to play it!

The game requires one person to be Jack The Ripper (Dr Photographer was incredibly keen. He’s always had that serial-killer glint in his eye) and the others to be the noble investigators. There’s scrambling, hidden movement, murder and a lot of roleplaying if you get into it properly.

Quite a long game, but simple rules and very enjoyable. We’ve since reviewed it in full, here.

A lot of people would say that this game is worth getting just for the model train. They’re probably right.

It’s also fun, but if I owned it I probably wouldn’t play it that often. I don’t think that’s just because I lost. It’s fairly simple but also seems to involve a fair bit of luck, and how much the other players get in your way! It has some fun pre-planned movement mechanics that are always a laugh. Fun as a game to play through, but not for strategy, perhaps.

A pretty medium game for me, in both length and enjoyment. But maybe that’s just because the standard of games was so high! (and did I mention  how badly I lost?)

The end of the day

As the dust settled, we all gathered round for the real game to begin. We all screwed up our faces and stared intently at the hat of names, trying to get our names pulled out as early as possible to grab our favourite games. Good tactics at this point are to run around to all of your friends and try to find out which games they enjoyed the most.

Lizzy came some point in the middle but it was enough to win her Letters From Whitechapel; she was pleased as punch. Last year she was chosen first (still managing to look incredibly smug about it, despite it being luck) and managed to grab Glass Road, which is also now a favourite of the team’s. 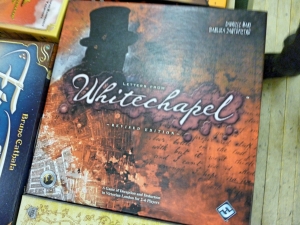 Gavcon works really well, but it does so because of the small number of people and the fact that they all know each other fairly well. Then you can be sure there aren’t too many grumpy disputes about anything like the money, the game you win at the end, etc. The atmosphere is friendly and the hosting seems fairly relaxed. It might not work on a larger scale, but if you’re interested in hosting your own board game events with a similarly-sized group of friends then we found this format to work really well!

As always, the real winner is board games.

*Gaviscon is the name of some kind of heartburn medication over here, by the way. Honestly, it’s a very witty joke if you’re from the UK.**

2 thoughts on “Misery Farm On The Road: Misery at Gavcon II”