Number of dicks in ear: 6/10. Dick size will grow in inverse proportion to the size of the map.
Pairs well with: cheap vodka. (It’s what people drink in space.) 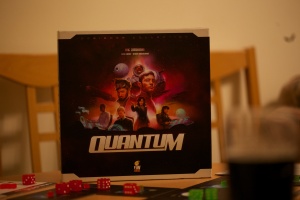 Lizzy loves a game where you know who you are. Where you really know what your motivations are and why you’re collecting <Generic Resource!>. Quantum is a game about space, and it does this quite well. It has a space background. You play as a kind of space conquistador, colonising the stars using cubes. Cubes are very important in Quantum, because cubes mean victory and the ownership benevolent leadership of galaxies.

The layout of the map is quite variable; there are several possible galaxies to choose from for each player number, and each has its own name. You can fight over the Outer Reaches, the Barren Empire, Terra Major, Terra Minor.

Even the planets themselves each have a name. Tau 18, Ursus Major 2, you get the idea. They even have lore and geography, if that’s your bag. It’s all very good sci-fi. Points for sci-fi.

For further points, each of your dice are your loyal spaceships and the number on the die represents the kind of ship it is. Even better, there’s some kind of story to the mechanics behind each number! A lower number is a lot slower but better at combat because it’s a bigger ship. A 1-die, for example, is a battlestation, which is the best at fighting but can only move 1 square at a time. A 6-die is a scout, they can zip around like crazy but aren’t too hot behind the weapons. At this point in the game your in-house Bob or Bob-substitute can demonstrate agility by throwing dice around going ‘pew pew’. It’s helpful or something.

As well as the changing planetary layout, gameplay is also affected by cards, which affect the kind of play which your space-conquering race can undertake. After invading landing on a planet you can, as they say in the trade, ‘do a research’ and so learn to do fun stuff like shoot more effectively and fly across the entire galaxy to thrust your dick in your team-mate’s ear.

If you are the kind of person who hates dice combat you might hate this game. But even our friend ‘Dr Hates-Dice’ loves this game! And he hates dice, or any attempt at putting randomness in a game. Briony, of course, is sadly unable to roll dice or dice-shaped objects and so found this game something of a challenge. She also hates dice.

In the words of Lizzy it is a game of learning and fun, if you understand how basic maths works. Bob, for her part, is unable to count, making the ‘fun if you know how maths works’ description more of a threat than an incentive. She has, however, played games with Lizzy before and understands that when our dear Liz looks particularly gleeful after rolling a die and buying a research card that no one is safe and… oh god oh god we’re all going to die… why is no one stopping Lizzy… we all know what happens when we don’t stop Lizzy and… oh yep she’s won. And she has the cheek to ask why we don’t trust her in board games.

Nonetheless, this game doesn’t rub your face in your failure like a misbehaving puppy. If you do badly it’s because you’re bad at very basic counting, strategy, and rolling dice. This is in comparison with games like Terra Mystica where you feel like a failure from round 2 because you haven’t picked up on the very specific and delicate strategy required of your race. Quantum is particularly enjoyable if you bear your position as commander of the fleet in mind when communicating with the enemy. “The OrionRepublic welcomes the puny Kepler Imperium to our planet!” “The Orion Republic denies all knowledge of the weapons fire around Minim 2586. You must have been watching a training exercise.” Also humming ‘Duel of the Fates’ (literally the only good thing in ‘The Phantom Menace’) and the Star Trek theme tune are recommended during manoeuvring and battle.

All in all this is a pretty fun game. It’s still Lizzy’s favourite thing to have come out of Essen 2013, well over a year on. Good luck on your colonisation, loyal Space-Dice. May the solar wind be always at your back.