You may notice that this game review is lacking in high quality Cthulhu Wars photos. That’s because none of us are insanely rich enough to own this game, so we’re relying on Lizzy’s camera from our time at Essen 2014. She hadn’t even realised that the lens was dusty at this point. Sheesh. Some photos have also been professionally recreated in a studio environment. See if you can tell the difference.

Back in the mists of time of 2011 our friend Emma brought me, Lizzy, and a select few others together to roleplay some eldritch misery, unwittingly creating a gang of powerful lady-nerds.*

It was my first RP experience and I’ve been hooked ever since.

Now I don’t have much interest in games beyond playing them. I’ve very little idea of which companies make good games and I’m regularly surprised when a game seemingly tailored to my interests appeared (looking at you, A Study in Emerald) so I had no idea that the cool-sounding Cthulhu game being exhibited at Essen 2014 was by the same guy who wrote the original role-play adventure. I wish I could say that the only time I embarrassed myself was when Petersen himself had to explain to me that he did not just jump on the Lovecraft bandwagon, but did to some extent start it. Unfortunately I also proceeded to get ridiculously excited and fan-girlish about the whole thing (to the extent that his wife told me to calm down), and to address him as ‘Sandy’ (to which he did not respond until I sheepishly reverted to ‘Mr. Petersen’).

In my defence it was a very exciting experience, especially when combined with the chocolate-

covered-chocolate-ice-cream stall just around the corner. Petersen was there like a proud, balding Mormon Santa Claus showing off his game, and one of his sons (or possibly grandsons) had the dubious honour of patiently teaching the game to a parade of smelly nerd troupes** (I think we smelled lovely) in a course of fully-booked two hour slots over the four days of convention. By the power of sheer exuberance I even got to beta-test Petersen’s next game, Gods War, which was still in the sharpie-on-cardboard stage of development. Stay tuned for an extra sneak-peek review of that game at the end of this broadcast.

The game itself is impressive in scale, and bonkers in execution. It was funded through a Kickstarter campaign, and thanks to that can afford to take a stance of ‘Look mate, you’re either in this entirely, or you’re out.’ I can imagine the kind of board games nerds who get off on the fiddly tactile bits of games getting feverish over this baby. There is a $199 price tag for just the core game (expansions are $59 each), with no option for a less-expensive less-artisanal version. It includes 64 incredibly detailed miniatures of Old Gods, monsters, and cultists. If you look closely you can see everything from the relief outline of the death-masks on the tiny cultists’ faces, to the cleft in the King in Yellow’s butt. Even the marker by which you tally your power is a tiny, adorable tentacle. It must be said, though, that there is something a little bit odd about

monsters which are defined as being unknowable, unnameable, indescribable horrors (H.P. Lovecraft was terrible at detail) being cast in plastic to play with. Takes away some of the awe. We didn’t actually say this to Petersen though, as the whole thing was so clearly his beloved baby and I already felt silly.

The game takes place on a board illustrated with an approximate map of the world. This has lead some of our more soft-headed moon-faced friends to think that the game has completely left the realm of Lovecraftian epic fantasy and entered into Risk-style grognard territory. Now

I’m not going to lie, there are dice. A lot of dice. So many dice that you sometimes need two hands to cast them all as part of a mighty god-against-god battle (it’s awesome). And yes, there is strategy involved. But the game isn’t a simple struggle for physical space. Instead, it’s all about power. There are a number of ways to gain power (and yes, taking up more space is one of them), and gaining power will earn you more super-special doom points, by which you may win the game. The faction you play (Cthulhu, Nyarlathotep, Shub-Niggurath, Hastur/The King in Yellow) massively affects how you can most effectively gain and wield power, and is further specialised through your faction-unique spellbooks.

This is both great as it really absorbs you in the fantasy of the game, but also leads to the big, huge, massive, gaping flaw in the game. Namely, if you do not effectively figure out at least a starting strategy which integrates with your faction’s play style pretty fucking swiftly, then you are utterly screwed within the first two rounds of the game. The rules of the game and structure of a turn are hardly straightforward either, so you might need those two rounds to get a grip on what’s going on. This is something I usually hate in games (Terra Mystica! Why!?), and it does completely unbalance it. In our game, and in friends’, you end up with two players massively in the lead duking it out to be the first to flop their enormous eldritch cock across the board, and two players struggling to get out of their starting zones.

In fact we played this game with Emma (of previously-mentioned Cthulhu GM-ing glory) and she never stood a chance. We were merciless, and with good reason.

Way back when, during our time as Cthulhu role-players we were very attached to our characters: Smokey Peterson the jazz musician, Old (insane, phenomenally rich) Trewilliger, Prudence and her gin, coquettish Mabel and… Jeff. Oh, Jeff. The only real good guy in the team. He loved corn, kindness and photography. Jeff!

One day something happened to Jeff that we don’t like to talk about. It had wings.

Then, in Essen 2014, just as Cthulhu Wars was starting, Emma picked up one of her pieces and said “Hey… this is the one that took Jeff!” 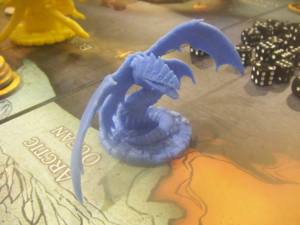 And hell did Bob and I avenge our comrade. This also, unfortunately, proved that if one or two people want to gang up on you in the game then there’s not a lot you can do about it. Definitely a whole bouquet of dicks in ear.

Nonetheless, this game is shamelessly fun. It’s complex but not impossible, with lots of juicy details to get stuck into/drive you into hellish pits of insanity. The rule book  comes with hints and tips toward getting the most out of your Elder God which apparently really helps to solve the balancing problem if you haven’t got a member of the Petersen family handy to keep you on track. Of course this is a moot point because I can’t afford it and this makes me sad.

*This was before she abandoned us to get married and live in the frozen north. Now she makes adorable nerdy crochet guys at justaddcrochet.co.uk

** Don’t get butt-hurt, we were smelly. It was hot in that convention hall, and full of fried foods and bodies.