“It’s great! I’ll trick them into family bonding. They’ll like me if I can turn us all into a team facing an enemy of some kind. Unity against a common enemy!” He said, maniacally.

You see, a couple of months ago said friend had been a very popular guy. He’d reluctantly taken in a stray cat at the behest of his friends and children, and soon realised she was a little bit rounder in the belly than he’d remembered. Four kittens later and Rich was the most popular friend / dad in town.

“OH HEY! We’ve just popped by to see you and spend some time with you and play some games with you… where are the kittens?”

One of the first purchases (which, of course, we insisted on testing *cough* before the kids tried it) was Forbidden Island. As described by our friend Dr-Photographer, and several others before him, “Oh, hey, you’re playing Pandemic, but easy!”

But don’t run away yet! If you’re like us, then you know that there’s little worse for a co-op game to be than easy. Co-ops need to balance their lack of competitive dickery with misery, misery and more misery. You need to have to strive for victory! And, dear readers, let us reassure you right now that Forbidden Island is not easy.

What does give Forbidden Island its advantage (or disadvantage, depending on who you are) over Pandemic is not that it’s easier, but that it’s simpler. You play some cunning explorers, and your goal is to acquire four glorious pieces of treasure and then flee the Forbidden Island. But, presumably, the reason that the island was so forbidden in the first place is because it’s rapidly sinking into the sea, or at least it has a tendency to do so when explorers try to take its treasure. Damn.

One of the mechanics that you might be familiar with is the ‘Waters Rise!’ card. These are like the outbreak cards in Pandemic, but you have an outbreak of water instead of an outbreak of, you know, diseases. The cards are hidden among all of the treasure and bonus cards that you’ll be collecting at the end of each turn, which you’ll need a certain amount of to be able to find treasures. (Just like you’ll need a certain amount of cards to research a cure in… what’s that game again? Pandemic.)

Also at the end of each turn you’ll need to draw cards which list places on the island, and the corresponding places that you pick will either start to flood or completely go underwater and get removed from the game. You need to particularly hope not to lose Fool’s Landing (nobody’s arguing against the idea that the explorers are fools) where you ultimately need to escape via helicopter, since losing that means you’ll lose the game. There are also only two tiles on each island where you can find each particular treasure, so if both of those are lost before you’ve actually collected the treasure from it then that’s also a big fat LOSE.

One more way to lose the game is, as you’d expect, drowning. If you’re on an island tile that gets completely lost then you can hurriedly swim to a nearby tile, no problem. If all of the adjacent tiles have already gone? Then I’m afraid that this is the end of your adventure, traveller.

It’s a little unclear in terms of the plot why everyone needs to survive for the team to win. Perhaps the adventurers have a very limited but strong sense of morality. The game is a beautiful tale of human greed, but not between the players. Should we travel to this forbidden island? Yeah, fuck the rules! Steal this treasure? Try and stop me! Let the sea swallow up this beautiful island? Why not. But leave one of your friends behind? NEVER!!

The whole game has a great rushed, panicked feeling about it, as it should. The further into the game you are, the quicker everything seems to move, as getting through more ‘Waters Rise’ cards means that the island starts to flood quicker and quicker. And for every island tile that gets removed from the game, the corresponding card gets removed as well, so you’ll suddenly find yourself having a very small deck and a very small island, practically drawing the entire deck every turn by the end of the game.

To make things seem even more desperate, a player only gets two actions per turn.* Which, by the way, is phrased unhelpfully as “Up to 3”. Up to, but not including. The amount of times that we forgot this as we were planning in our first game is … a number high enough to be embarrassed by. 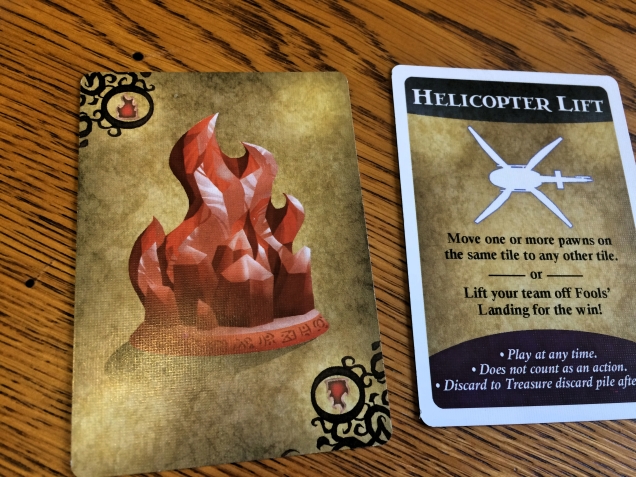 One of the actions you can do is to try to stop the island from going completely under before you’ve high-tailed it off with the treasures. The action is to flip a slightly soggy land-tile so that it becomes dry land again, and the action is called ‘Shore Up’, but it’s a little bit thematically unclear what you’re actually doing. We think there might be a lot of mopping involved. But the amount of mopping you get to do versus the rate at which the island is going under is pretty heavily tipped in favour of the sea. As such, this part of the game tends to feel a little bit like one of those cartoons where a poor cabin boy is using a tiny bucket to chuck the water over the ship and back out to sea, even when water is crashing in around him faster than he could ever bail it out.

The game is fun, and it’s not yet one that we’ve mastered. We’ve only won once on ‘novice’ level so far, and we’re not convinced that we’d have done so well if the difficulty was raised at all higher.

Some of the roles that you get to pick seem to be a bit pants compared to some of the others. But perhaps that depends on how you play. Also, this might just be an excuse we’re all throwing out for why we’ve lost so often. (I’m sure if we’d been playing with [insert any other role here] then we’d have won that game… *cough*)

We’ve also been on a bit about how similar some of the mechanics are to certain other games, so does it have an advantage? Well, it doesn’t have a legacy version for you to drool over, and the simpler rules do mean that there’s a bit less of a feel for strategy than a lot of games can offer. But it’s not all bad! The theme is good and you can get into character just a little. And the simplicity is in some ways a good thing- not just so that the rules are a bit easier for kids to pick up but also because it means the game moves really quickly, and it can achieve the desperate panicked atmosphere that it’s aiming for.

The real winner is not the island, nor the treasure, and certainly not us. It’s board games.

Edit: *It has come to my attention, thanks to the ever-wise Mac in the comments, that there’s a discussion on BGG about the actions. Consensus on the small thread appears to be that they do mean three actions rather than two, but now we’re not sure what to believe. Have we just been extra-hardcore this entire time? The only thing that everyone can agree on is the confusing nature of the wording.

CAN WE TAKE THREE ACTIONS OR NOT??

4 thoughts on “Forbidden Island: I sink we need to get out of here!”