Brutus rating: 9 zingy lightsabers in the back out of 10
Pairs Well With: Slurm! Romulan Ale! Anything pumped with sugar and caffeine

The story of the Misery Farm and Twilight Imperium begins with Bob and Christmas. Bob spends every Christmas with her family and a number of close family friends (as South Africans the lot of them are constitutionally incapable of negotiating ‘small, quiet’ events). There’s lots of food, wine, dogs, excited children and merriment.

Initial plans were to go from family home to Reading for new year’s eve with the friendly robot boyfriend (FRB) before looping back round to the blessed isolation and wonderful silence of home in Southampton. Then the kids got an honest-to-god noisemaker as a Christmas present. The electronic kind, which plays loud, tinny jingles and farty sounds at the push of a button. Far from being a form of passive-aggressive punishment inflicted by child-free friends on their parents it turned out that their mum (!) had actually bought this thing (!!) herself (!!!) as a gift for her own kids (!!!!).

Naturally, Bob wanted to leave as soon as humanly possible. Unfortunately there wouldn’t be room for her at the FRB’s house until the late in December, and he had planned an all-day Twilight Imperium 3 game on that day. But there would be a constant supply of tea and biscuits if she was interested. Sold!

She had no idea what she had gotten herself into.

First port of call if you need a game overview is of course the blog Shut Up and Sit Down. If you are living under a rock and are somehow reading this without having heard of them, then know that they are nice young men who combine informative game reviews with a quirky and funny presentation style (so pretty much the opposite of us). Their review of the game as fun, complicated but not arduous, and epic in both scale and style was encouraging, and Bob proceeded to download the rules with a view to getting a rough idea of the components, win conditions, and what a turn generally looks like (the holy trinity of basic game understanding).

Here she hit a snag. Having only recently become the kind of special, habitual nerd who can visualise a game to any sort of degree just from reading the rules, these presented something of a challenge. It wasn’t the length of the rules which intimidated her, nor their complexity, poor structure, or incredible, gasping dryness. It was more that better things to do than reading them seemed to repeatedly crop up. Taking a nap, for example. Eating all the Christmas jelly beans. Re-watching Star Trek, Frozen, and the Muppets Christmas Carol (with all the scary bits fast-forwarded so the kids wouldn’t have to hide behind the sofa). If she weren’t under strict instructions from supervisors to Chill the Fuck Out and Take a Holiday then some work might even possibly have gotten done. Maybe.

This wasn’t entirely unfair, in hindsight. TwImp heralds from an era of Fantasy Flight games (i.e. their entire history) when writing down the rules was considered an unfortunately necessary afterthought to game creation. The amount of text in the FAQs on their website exceeds that of the written rules by a factor of about fifty, and even the super handy-dandy cheat sheet on board game geek (second port of call for the game explorer) is twelve pages of tightly-packed and colour-coded terror. Bob refused to be deterred though, forging bravely ahead. It was either this or another day of confiscating her mum’s 11am gin and being forced to watch a ten-year old play Pokemon Platinum* on their shiny new 3DS**. To some long-term gaming buddies this mission to Read the Damn Rules seemed one step away in terms of desperate foolishness from considering a career in crippling heroin addiction. Eventually even Bob had to admit defeat at page 14, and instead downloaded the TI3 app***.

Game day rolled round with an inauspicious start. Bob arrived late and without all the necessary supplies of crisps, cigarettes and sugary beverages that would make a ten-hour game bearable. Luckily the FRB has excellent friends. Ones complete with mandatory nerdy graphic Tshirts and an exquisite layout of appropriate snacks including Gagh (gummy worms), Slurm (Mountain Dew), and a handy supply of delicious codeine and Marlborough Reds to alleviate the crampy terror brought on by driving. FRB did his part by making Bob two whole cups of tea without complaining more than 6 times.

And it only took an hour to set up the game and go over the rules. Briefly: a central planet 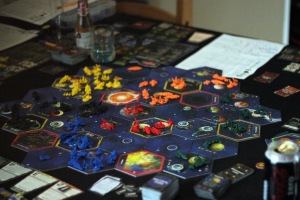 (Mechatol Rex), the seat of political power in the galaxy now mired in civil war and petty bureaucratic struggles. It is surrounded by planet and space hexes, which generate resources if you invade take them under your wing. You play as a race fighting for dominance according to certain objectives. First to ten victory points wins. You can usually get a point per turn, and a turn takes an hour. No joke.

Okay, so this game. This game, guys. It’s insane. No one playing it for the first time can
possibly have any idea what the hell is going on. Going over every single rule would be exhausting, and remembering them all on the first try is impossible. It’s entirely plausible that everyone was cheating the entire way through but the fact that we were playing with two extra expansions (and therefore a whole bunch of new and expanded rules) meant that no one noticed or really knew what was going on themselves. 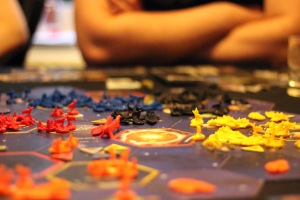 long as you have a rough overview of what you might want to do on a turn, and there’s someone around the table willing and able to walk you through the fine points. Some things, like spending resources, invading planets, and building technologies and spaceships are very knowledge-dependent, unfortunately, and messing them up can really ruin your turn. Mercifully the sheer size and duration of the game makes it weirdly forgiving until the very last few rounds.

Some parts are refreshingly simple, such as the straightforward dice-rolling ‘pew pew’ of combat. On the other hand some elements, like playing a political action card in order to pass a law in the galactic senate, are almost like bizarre meta/minigames in themselves, as you try to bribe each other for votes while assassinating other players’ delegates. Sometimes, if another player is particularly annoying you with their piractical trading methods or pointed demilitarisation of strategic planets, you can even assassinate them twice*****.

The potential for greatness is there (and beginners can do just as well as experienced players with a bit of strategic placement and luck), but it is absolutely exhausting on your first time round. After having your ass solidly kicked across the galaxy by the Winnarian traders you might even swear off it entirely.

But then find yourself thinking, at odd moments, how you could improve your strategy to finally conquer Mechatol Rex and really show those damn space-lions who’s boss.

As you play and get comfortable with the rules (which can take several long, long games) it all starts seriously picking up in terms of mad, bonkers, shooty fun. Despite its enormity the strategic elements are reasonably flexible. Alliances are made and broken based on objectives and the layout of the planet hexes (ah, that nebula of hugs sure looks protective. Wait, guys, why are you launching that dreadnought? Guys…?). You learn the particular skills and weaknesses of your race and start to posture with great big spiny hedgehog death stars war suns.

Bob’s first race comprised spooky space ghosts who love wormholes and for some reason have a super-90s-wildstyle-graffiti-looking symbol/crest thing. They have the unique ability to build an enormous flagship which then acts as a wormhole itself, allowing fleets of warships to pop up all over the map (entertaining but not recommended for beginners). Incidentally the flagship looks an awful lot like a fish with antennae bits all over it. Bob assumed this was to streamline it so that it might effectively fly through the massive friction and air resistance of outer space, but it turned out that she did in fact have the ship flying backwards. Other races include incredibly combative swarms of cockroaches led by a shadowy matriarchy (who for some reason no-one trusts. Damn speciesists), clouds of fungal spores, lion-people with civilisations built on the backs of elephants slowly traversing their desert home-planets, cyborg remnants of the once-ruling race spreading their mindnet low-cost broadband internet through the galaxy.

This game is fun, and mad, but very very long. Set aside a full day for it, and don’t play it without an experienced player to guide you through.

**Sidenote 2: This kid wouldn’t let Bob take a turn and had the bloody cheek to tell her that an Umbreon was a kind of Pokemon in a tone of voice usually saved for the hopelessly elderly and out-of-touch. Since being informed that we had in fact had Pokemon when we were kids it’s been non-stop Poketrivia quizzing of seemingly every Pokemon except the original 152. She calls them the Pokemon from ‘back in your day’.

*** More useful than the 12-page cheat sheet**** by a factor of about 300. It helps you keep track of what technology you’re building and are able to build, and keeps an eye on your various battle stats.

**** This is a ridiculous fucking thing anyway. It expects you to print out the pdf on legal paper and then fold and staple it into a booklet. What is this, 1963? It has the potential to be amazing but only if it were turned into a beautiful, easily-navigated hypertext doc. With a fucking contents page and some kind of fucking recognisable structure. One day. In the future.

*****Sorry Chris. That’s what you get for not letting me invade Mechatol Rex.