Pairs well with: Sloe gin with lemonade. Because it’s adorable, just like the game.

Traitor rating: 3/10. It’s dickery by omission – avoid picking the cards that will ruin your opponent’s adorable little planet. Because you’re mean, and you hate happiness. 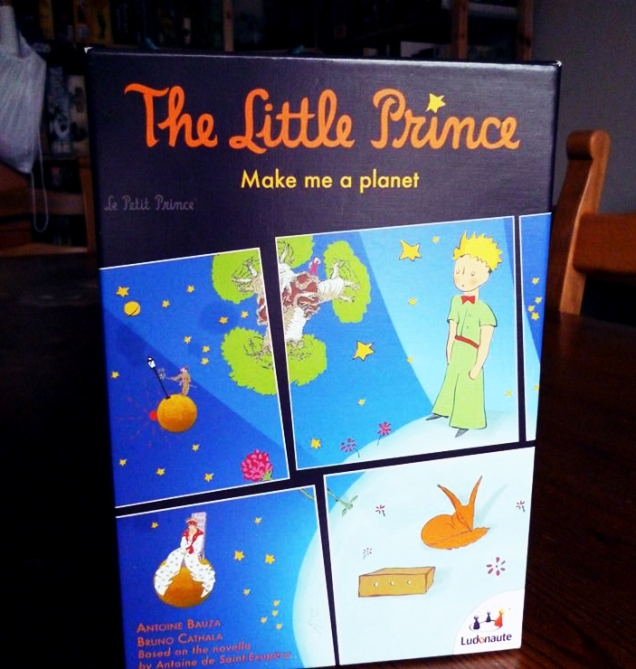 A smaller game, the kind that fits well at the beginning of the evening or slotted between two longer games, The Little Prince also works well as a soothing follow-up to something a bit feistier. Worried that your friends will never speak to each other after a long slog of Game of Thrones: The Board Game? Concerned that your compatriots will never stop calling you traitorous toaster scum after you defeated them at Battlestar Galactica? Worried that you and everyone else are going to murder Lizzy because of her stupid smug victory face after a game of Scoville, and then get in trouble with the police in the morning? Then maybe The Little Prince is for you!

Funnily enough, one of those above situations was what led to The Misery Farmers playing The Little Prince together for the first time. Even though it doesn’t have a whole world to offer in the way of strategy or unique aspects, and it’s not as catchy and unique as some of the other short games we all know and love, it does definitely hold a top spot as being something peaceful and adorable to play. It would probably be very kid-appropriate (we don’t know any children ourselves so we can’t check), but it’s also a fitting introductory game for e.g. nice mums who have nothing against board games per se but everything’s changed a lot since Monopoly and they’ve misplaced their spectacles and what does this card do again?

“So this tile is good ‘cause it’s got loads of shit on it, where this other tile is good because of all this stuff on it. But this one, he’s a bastard because he’s got all this bad stuff on him.”

Luckily in the cold light of day we can briefly explain the rules a little better.

The Little Prince: Make Me a Planet is a short game based on the French children’s book of the same name.* You assemble an adorable little planet made up of 12 tiles with, as Bob so helpfully explained, stuff on them.  The game lasts for the same amount of turns as you need tiles to build your planet, and there’s a neat strategy of turn-taking in which a player picks three tiles from a tile-pile, chooses a tile for their planet and then decides whom to pass the remaining two tiles onto for next picksies.

It does have a few unique twists that make it interesting. Some of these tiles will determine how your planet will score points at the end, so you can find yourself with a choice between taking a tile which might get you points or tiles which might get you ways to earn points. You’ll have the complete set of tiles by the end anyway, but do you want to decide on point-scoring tiles earlier, or do you want to leave it until later so your comrades are equally clueless for now?

Collecting certain types of ‘stuff’ is how your victory stars are reaped. Obviously, you should maximise the kinds of ‘stuff’ which your point-scoring tiles say you need to get points. The objects themselves are fairly whimsical; it’s as if a little prince made them up. Items such as sheep, cardboard boxes (with sheep in them), snakes, roses and lamp-posts are all among his imagined items, and are all adorably drawn.

Briony, never having read The Little Prince, would like to know where the clearly man-made lamp-posts came from.  Who installed them, and for what purpose? Which interplanetary council maintains them and pays the lamp-lighter to light them?**

The job of maintenance and management clearly falls to us as sole members and executors of the planet-construction committee, replies Lizzy. Very sadly, the game involves no complicated mechanics for lamp-post-powering or allocation of maintenance workers or electricity. Now that would be a great game. We could call it ‘The Little Misery Planet’ and it’d feature lots of sexy worker placement and focus on the logistical challenge of planetary maintenance.

A further layer of interest is added to the actual game by the presence of Baobab trees. Baobab trees, unlike most other features, take up a heck of a lot of space. Chief Science Advisor of the board game company clearly knows how to do their job, and knows how trees work. They need roots, you see. Lots of roots. To root them down. Particularly space-Baobab-trees, you see, to protect them against floating away. It’s basic science.

You’ll also notice, however, that the big trees are pretty big, and the planet pretty small (the little prince obviously wants a little planet). No, that tree you see on the tile isn’t just a scaled-up picture of the tree to represent the actual tinier tree down on the planet’s surface – it’s the actual size of the tree. The problem is that the deep, anchoring baobab roots take up a lot of space, and can start breaking up the planetary core! This means that your planet can only really sustain up to two live Baobab trees.

Oh balls, there are a lot of tiles with Baobab trees! What happens if, in your haste to set up some lampposts and acquire some points you acquire one too many Baobab trees? All three tiles with the trees on get flipped over. That means everything on those tiles, lampposts and all, are gone. No points for you! Be sad!

The thirst-quenched Misery Farmers had some very sad tree-times on their planets. Very sad indeed. Only Lizzy managed to successfully employ a strict tree-avoiding strategy to avoid the dickery, since she was very aware that Bob was still fuming at her from a previous game, and that no amount of peaceful adorable game-theme would protect her from Bob’s venom.

The other farmers though? Not so careful. Ex-Baobab wastelands everywhere.

The game is neat, and kind of cute. Probably of particular appeal to small children and drunk adults who need a bit of help getting through the rest of their evening. And more so to those who have actually read the book.

The real winner, as usual, is board games.

* Is it really a children’s book? Philosophical treatise? Morality fable? No one knows how categorise it. Finding it in a bookshop is bloody impossible.

** Those who HAVE read The Little Prince will agree that the lamp-lighter is owed some serious overtime.

**** We’d like to pretend this was the first time Bob has sent a regretful ‘Sorry I threw pieces of game at you’ text message to Lizzy the following morning, but it would be a lie.