Pairs well with: a nice pint of cider, preferably un-spilled.
Traitor rating: 2/10 no real way to ruin each others’ day unless you get particularly creative, like muscling in on someone’s treasure or taking the sword they need.

You would think that by now your Misery Farming friends would be running low on games purchased at Essen. You’d be wrong! We save up all year for that madness. Having said that, this week’s game was not bought by us at Essen but rather was given as a gift.

Bob, as you might not know, is a bit of an academic Jack of All Trades,* though she prefers the term ‘renaissance woman’. Bit of coding? Yeah it’s lurking in there somewhere. Film studies? Yep. Performance art reinterpretation of Stravinsky’s Rite of Spring? Yeah sure why not. Among these many awe-inspiring skills is some spectacularly mediocre German, which gets drafted into service every year for Essen Spiel (with progressively less impressive fluency as time goes on). In 2015 it was pushed to the limit by an all-you-can-eat sushi restaurant that was unable to deliver any you can eat sushi. After waiting for food for two hours the whole table watched in awe as Bob drew herself up to her full height of 5’4 and did something that went against every British instinct: she made a complaint.

The stern Japanese proprietress was unimpressed, and only after a long, long exchange of bad German on both sides interspersed with stony silences was Bob able to procure a mighty 20% discount.

Nonetheless her bravery inspired her comrades and on the last evening they surprised her with a copy of Takara Island as a reward, which she had been eyeing all weekend thanks to its beautiful illustrations (another masterpiece from Naiiade), but had never quite gotten around to buying. It was actually quite sneaky: they staged a conversation so spectacularly boring that Bob zoned out and didn’t notice people slipping off to the Ferti Games stand. It was about the comparative size in millimetres of Warhammer model settings. No normal human can withstand that.

Bob’s given it a few plays since then but she finally gathered up Briony and Lizzy for a play-through in late January at Southampton’s favourite inner-city gastropub the Rockstone. Their ridiculously alluring veganuary specials might have had something to do with it. After munching down burrito bowls and veggie burgers with blue cheese sauce* we set up the board and got down to some rules-explaining. 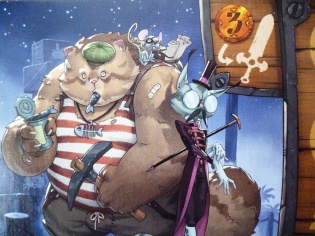 … Which of course was interrupted when someone knocked over a glass of cider, prompting a chorus of ‘noooooooo’s and scrabbling to save the cardboard bits. This summoned the very lovely barmaid who said that we sounded like a chorus of angels. Aw shucks. Loveliest thing anyone has ever said to us.

Excitement over, we could get started.

‘First things first,’ declared Bob, ‘this is a game about treasure hunting. No complications, no mixed motivations or influence or hidden goals or nothing. Just delicious treasure. You’ve packed up all your shit because you’ve heard there’s loot under the sea and you want to hunt it!’

Briony, looking closely at her character board, commented that it didn’t look like she’d packed anything, really. Except a bear.

It really is a supremely straightforward worker-placement game elevated by adorable graphics and the gentle thrill of minor combat and diving for treasure.  You begin the game with two workers and no money. There are various actions available to you, from gathering small amounts of money to converting your money into treasure (only treasure is worth points at the end of the game). These actions are represented by drawings of buildings on one side of the board. 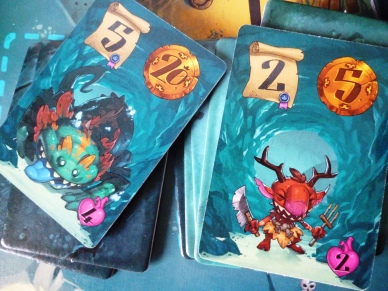 On the other side of the board is the sea, on which are placed six stacks of nine tiles. You must ‘dig’ through these tiles in the search for the fabled Stones of Legend, clearing rockfalls and battling monsters along the way. As you go deeper into the stacks the monsters get tougher but the rewards become greater. Sure you might find a creepy sea-bat-dragon, but you might also find a very valuable glowing-eyed Tiki icon. If you come across a monster while digging it will beat you up and send you to the hospital, causing one of your workers to be out of action for the next turn. Luckily you can also ‘survey’ as an action, which means looking at the top three cards in a stack to figure out if that mess is worth your time.

Some of what you find will be worth money instead of treasure points. Money is still useful as it allows you to rent the sword (the only way to fight monsters), as well as hire more workers. A one-off payment of 5 gold will buy you another permanent worker. All three of which look suspiciously similar.

“Are they nice triplets?” asked Lizzy, eyeing the stack of extra workers.

“I don’t know, they clearly have mixed loyalties. How come they will only work for different teams?”

You can also hire experts who will perform special actions for one turn only. For example the mistress of foresight can look at three cards anywhere in a stack. Briony likes her in particular because of her fabulous hat. It is a giant eye.

The miner can dig through several tiles at a time rather than the usual one.  You can always tell the miner because Bob forgets which one is him every single time she plays. Luckily Briony was on hand with keen observations.

“Hey Bob are you sure this one is the miner?”

“Because this one has a pickaxe and a little light on his head.”

“So do you think he could be the miner?”

Scoring is done at the end of the game, and is a bit odd. The game ends when both Stones of Legend have been found or too many stacks have been completely cleared without finding the stones. If that happens then everyone loses. If both stones are found, but by different players, points are scored according to overall treasure accumulation. If both stones are found by the same player they win forever and everyone else loses no matter how much cool other junk they’ve found.

The tiles come in three stages of difficulty, and the tiles for each stage are randomised. If you follow the rules properly then this randomisation is more or less perfect while still ensuring that both Stones of Legend do not occur in each stack. While this makes the whole thing more balanced, there ain’t nobody got time for that. The ol’ ‘shuffle and get on with it’ method is a lot more straightforward, and the possibility of both stones appearing in the same stack gives the whole game a higher risk/reward ratio.

It’s a fun, light-hearted game. It would be good for introducing new friends to Euro-style or worker-placement games, as it’s actually quite superficial. Strategy is minimal, though there are ways to optimise your play (Bob favours a ‘dig blindly while still in the easy early stages, then hire the mistress of foresight for fancy surveying when you’ve got some cash’ playstyle, while Briony prefers to fight monsters (with mixed results)). It would get new players used to the mechanics of ‘proper’ games, without the harrowing punishments usually doled out by said games.***

Maybe also pretty handy for kids, or parents, or those friends who just can’t pick up the rules that quickly and aren’t that deeply into board games as much as they’re into just having a pleasant evening (weirdos).

There are definitely a lot of worker placement games around. But although it doesn’t stand out greatly, it has some pretty beautiful graphics and is still good to play.

The real winner this week was board games. And treasure. And cider.

* And Master of none one! Geddit!? Cuz she has a Masters…? Hahaha?

** They were out of fancy ramen with mock duck gyoza. So sad.

*** If playing Agricola doesn’t make your soul hurt so much that you feel the need to name a board game blog after the pain it causes, you’re not playing it right.