Pairs well with: Sake, or another spirit derived from rice.
Brutus scale: 4/10 for the dickery-to-other-players scale 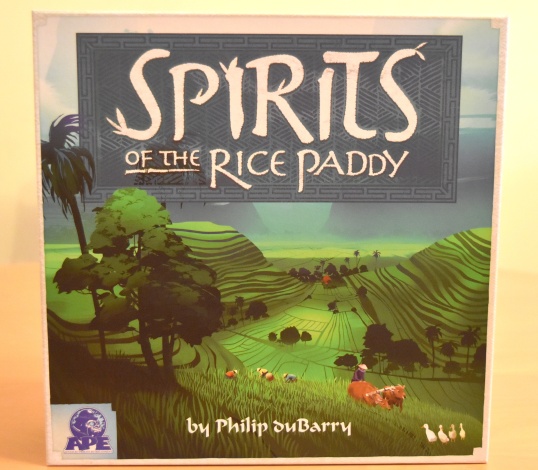 Sometimes rather than jostling for attention with a review of a big-name high-flying board game it’s nice to settle in with something which might have been criminally overlooked. Something clever, attractive, and strategic. Spirits of the Rice Paddy is such a game.

Briony bought it in anger during Essen Spiel 2015. She had queued up for an hour for the chance to buy one of the last three copies of a game of Burano, and had walked away empty handed. Instead of saving the large amount of money she would have splurged on Burano, she instead decided to angrily stomp around the convention halls looking for the prettiest box. Rounding a corner, she encountered Spirits of the Rice Paddy and fell in love with the art. She watched it being played for about 20 seconds before resolving ‘Fuck it, and fuck the board game gods. I’m taking a risk and buying whatever the hell it is’.

Fortunately, she does not regret that decision to this day.

Other people do, however. Pat, Briony’s angry punk boyfriend, finds this game particularly annoying and difficult. Everyone else isn’t really sure why this is the case, as rice isn’t the most challenging of crops to grow (it just needs a lot of water) and it really hits the spot when you’re hungry and want 1000 of something.*

Spirits of the rice paddy is set in Bali, and you play the role of a rice farmer. You own a plot of land that may be sectioned off into paddies in order to grow your rice and earn some tasty, tasty victory points. Fear not though, brave rice farmer, for you will also have a hand of cards which represent certain Balinese gods which give you a little helping hand.

We assume these are real gods from the local culture, but we are too lazy to check and instead are more taken with imagining what powers we would have as Balinese gods –

‘I would totally be like this snake guy, but with legs. My power would be to give all of the snakes legs.’

‘Well I would be better than your limbed serpent – I’d have the head of a dragon and the stomach of someone who really likes eating rice. That way I can judge which rice is the best and reward whoever grew it, while still maintaining my fearsome appearance.’ 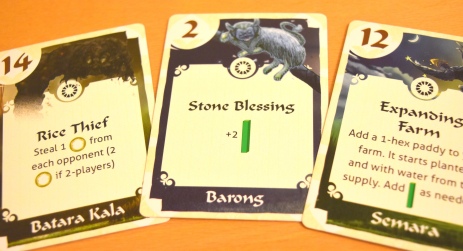 The game begins by dealing a hand of gods, selecting one, and passing them clockwise. You build up a hand of four cards, which you play in an order of your choosing once at the beginning of each round. Classic card-drafting stylee. The god’s power is in affect as soon as it is played, and the number in the top right hand corner then dictates the turn order. Gods with higher numbers go later, but have more powerful benefits. It turns out its very tricky to get the balance of numbers right as each number adds to the ones from each previous round, meaning that you can’t get away with playing one high card among three lower cards.

Each player has a board representing their own plot of land in which to grow rice. You can hire hard-working meeples to do jobs like plant and harvest rice, and to build walls to form paddies. You can buy livestock (oxen or ducks) to remove rocks and pests. Both of these guys are pretty important to build up functioning rice paddies. 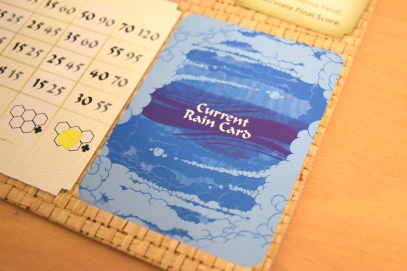 You begin the game with one small paddy – in order to be able to grow rice you will need land enclosed by walls, with an entrance gate, an exit gate, and the all-important water. Actions follow an order on the right of your board. At the beginning of this phase you allocate all of your meeples and livestock to the part of the chart you would like them to do. Then, when everyone is happy with allocation, all players go through each job step by step together.

The amount of water in a round is dictated by turning over a rain card. The water then collects behind the water gate of the player with the lowest-numbered gods. Only some actions may be completed without water in your paddies (for example, removing weeds). Then comes irrigation. The collected water flows through the first player’s paddy, and remaining water passes on to the next player.

At this point you begin to see why the number of your Gods is so important. 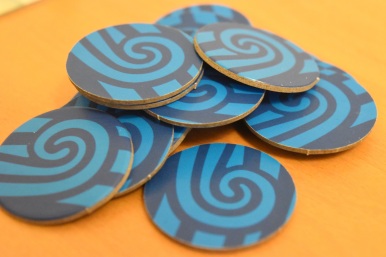 Often the amount of water varies, and players can be left with half-filled paddies (which are useless), or even completely empty paddies (which are useless-er). Once you have managed to plant some rice in a watered paddy, there is no guarantee that pests or rocks can ruin that rice. Rain cards, more frequently in the later stages of the game, bring plagues or… just rocks. This means that if you have several paddies growing rice to be harvested next turn you’ll still have to drain the water, remove the pests, and then re-water before you can harvest well.

Over time we stumbled upon a good tip for rain card pests and rocks; the rain card sometimes allows you to allocate the pests and rocks yourselves. As long as you have a certain number somewhere in a paddy the rain gods are totes appeased. This means that if you leave a small paddy intentionally empty, you can allocate all of your nasty things there and it fucks with your strategy a little less. 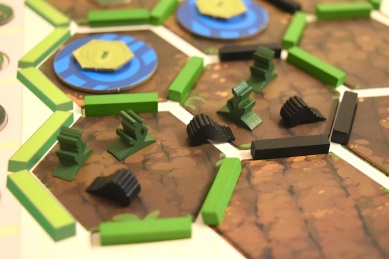 Once all of the jobs have been completed by all players the actions phase ends and the market phase commences. Amazingly, selling is uncompetitive (you stock your own market on the left of your board) which is fairly rare for these sorts of games. You can hire more labour and livestock for your majestic rice empire… *cough* which may currently more resemble a plague-ridden paddy of horrors and only produce only one bag of rice every two turns *cough*… 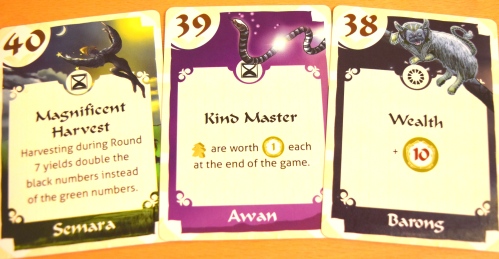 During the beginning of turn five another deck of gods will appear. With divine intent. These gods are much more powerful than the starter pantheon, and can help you do much more – especially if you tailor your final stages strategy to their powers. There is one small twist however, as in the final stage of the game all rice you harvest and subsequently sell is worth practically DOUBLE however much it was previously worth (some of the best gods will allow you to add even more to that).

‘Move aside, lower carb-consumption god. I now have ‘wipe everyone out with my rice empire’ god. His name is Monsanto, and I have a lot of rice.’

Overall, the game is beautifully designed. The gods bring a nice setup to the beginning of each round, and boy do you learn fast that you either play low-ass numbers, or select gods which provide you with water themselves. The progression of the game is something we enjoyed as well, as it really gives the feel of time moving along in the mountains for the farmers (after years and years you learn to grow better, and gain more favour with the gods, and your children don’t starve). The only downside we found was that at the very beginning of the game, each player will be given a starting conditions card at random. Some of which seemed to be massively unbalanced – we had one person starting with 5 walls, and someone else starting with three walls, extra meeple, and a wad of rice. To combat this though we just took out the ridiculous cards and made it a little more even.**

Aside from this, we are really looking forward to seeing what other games Philip duBarry produces, and strongly hope that there will be more cute pest pieces and pretty drawings.

*With apologies to Mitch Hedberg

**We assume that this is because the game is in rather early stages (there are still some grammar mistakes and inconsistencies in the rulebook).

One thought on “Spirits of the Rice Paddy: May the rains be ever in your favour”