Pairs well with: Clumsily-mixed cocktails.
Brutus Rating: 3 daggers in the back out of ten 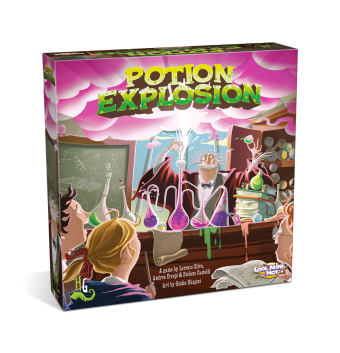 There is one big problem with regular and varied board gaming. It is not, as you might imagine, a growing addiction to the adrenaline rush and euphoric thrill of playing out a perfect winning strategy. It is, in fact, rules. Reading rules is boring, learning them from other people is even worse, and explaining them to new players is almost as bad. The only person in the world who actually likes sitting down with a nice fat rulebook is Bob’s boyfriend Chris, and he is, as previously mentioned, a robot. Beep boop.

Luckily, when we settle down for a gentle Monday night game of Potion Explosion, there is only one noob among us. Additionally, it’s not particularly complicated and Briony’s angry punk boyfriend Pat can do a decent job of explaining a game when he puts his mind to it. Plus Briony and Bob have enough fine red wine to see them through this difficult time (Waitrose, son. We don’t fuck around with our red wine).

A bottle of Malbec and a Chinese takeaway (not a recommended pairing) later, and we’re ready to go.

Potion Explosion (or ‘Poshe Exploshe’ as the kids call it) is a fun, intuitive game for two to four players. You play as a potions student sitting their final exam. You have before you a little Bunsen burner thing with space for two flasks, and a communal chest of potion ingredients. Every time you take an ingredient you cause the two ingredients on either side to collide with each other. If those ingredients are of the same type then they explode and you must take them, too. In this way you fill your flasks, making potions with different effects when drunk. You may ask for help from your professor, deducting points from your final score, as well as drink the potions you have made (depleted potions still count towards your final score).

The ingredients are represented by pretty marbles of different colours set in a fancy little cardboard chest/dispenser. The chest is extremely fiddly to construct, but worth it for its mechanical ingenuity. When you take a marble from a row, the tilted tray forces the marbles on either side to collide, making it easy to see when you’ve formed an exploding chain. The marbles go into your flask on spaces designated by colour, into your ‘extra ingredients’ pool, or are discarded into the top of the chest. The chest-top is also slanted so the marbles roll down into new rows at random. It’s very clever.

It’s basically like manual Bejewelled Blitz, and it’s adorable. It was the first game played by Bob and Chris at Essen and they were immediately charmed. Through the weekend it was played by all the Misery Farmers and farm-friends to the delight of every single person. It even put a smile on Pat’s face. It’s intuitive and requires a decent amount of luck, so even a first-time player has a chance at winning. The only slightly tricky part is remembering what each potion does, and using their powers appropriately. The powers are handily indicated on the neck of each flask, and are enjoyably thematic. For example the Love Potion allows you to steal the extra ingredients in another player’s pool, while the Draft of Prismatic Joy will let you use the wrong ingredients to fill your flask.

Sidenote: the stoppers are adorable. One is a little brain, one is a little tentacle skull. There’s a happy green blob-guy. It’s great.

Importantly, cascading is possible and even encouraged, in which one explosion triggers a chain reaction. By careful potion-drinking and occasionally asking for help you can set up a turn which will rake in the marbles. There is no punishment for taking too many apart from you must discard any you can’t use or find room for in your ‘extra ingredients’ pool 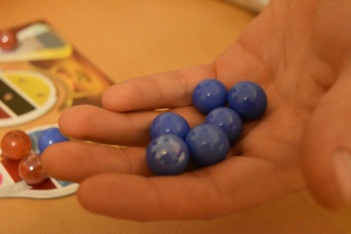 Pat demonstrates this to great effect in our Monday-night game as he set up a perfect cascade in his second turn, netting himself approximately a million marbles and filling two flasks. This puts him unusually in the lead, and keen to maintain his advantage he takes an e-turn-ity (lol) planning each subsequent move. It’s Briony’s bad luck to be next to him, as she is left with the meagre scraps and useless ingredients he leaves behind. This is the big difference between playing this game as a pair and as a four. Unlike many board games this actually scales really well for two players, but the gameplay is very different. In a two-player game it’s much easier to predict what your opponent will do, and plan around it. In a four-player game the marbles move much more quickly so planning ahead becomes difficult.

Bob amuses herself during Pat’s eternal pondering by opening another bottle of wine and trying to play with Briony’s camera. It does not go well.*

Points-scoring in Potion Explosion is based on several factors. Firstly, the value of each individual potion; more complicated potions score higher. Secondly, variety; taking a set of five different potions will score you a rosette, worth four extra points. Finally, similarity; making a set of three of the same potions will again score you a rosette. The game ends when four rosettes are gone.

Pat convincingly wins this match, but Bob and Briony will rise again. Briony was in fact mainly grumpy because since Essen she has only lost the game once out of roughly 12 times. Despite that the real winner is 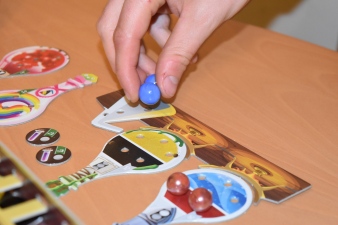 definitely board games, as this would be an asset to any collection. Easy to teach and fun to play, and allowing for both light and heavy levels of engagement and strategy. It’s also so original we had to make a new category just for it.** Plus Lizzy is unexpectedly terrible at it, which gives it a level of unanticipated glee for every person who’s ever played anything else against her.

*There is a reason why Bob is not an officially-sanctioned Misery Farm photographer.
** Horrible Games are good at this. Good work Horrible Games. 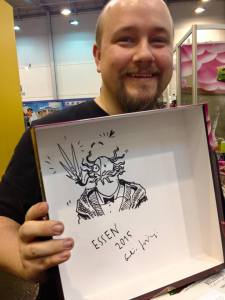