Pairs well with: Beer sipped from a horn or antler.
Traitor rating: 8/10 for stone-flicking treachery . 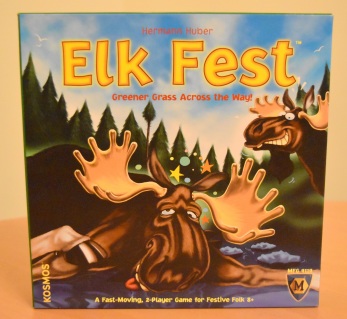 We here at the Misery Farm are not sure whether Elk Fest counts as a board game. It has pieces, but no board. Players may follow a loose strategy, but there are only about 3 rules. Regardless of whether it is a board game or not, it’s immensely fun and it involves elk. That, as we’ve just decided, is what really matters.

Elk Fest is a popular game among our friends*, probably because it makes for a great party

game, pub game or mad ‘friendly’ tournament**. The game is for two players and you each begin with a small wooden elk, an island, and three round grey stones.  The islands are placed a box-width away from one another with the colour-coded elk placed on top. The three stones are lined up alongside the island, primed and ready for some moving. The aim of the game is to flick the stones to create a path for your elk which leads all the way to the other player’s island. Player number two is also trying to do this, and so you must concentrate and be accurate, while trying to ruin their strategy as much as possible.

In your turn you are allowed two flicks of any stone, as long as it does not have an elk on it. This is the real kicker because the three stones you begin with do not necessarily belong to you. If your opponent sees you trying to line up a great shot for the next turn, they are perfectly within their rights to flick the same stone over to their side, thus ruining your magical elk moment.  If you manage to set up some stones for your elk to jump across, then you pick up your elk, place them on the new stone and then remove your hand to prove that the elk is free-standing, and then continue. There is no limit to how many times you can move your elk in the turn (except the natural limit of how terrible you are at flicking stones into the right place). If you manage to knock any elk over by any means, then you must miss a go and the stone that you moved must be replaced back to where it was. Bad elk-master. We know you’ve already had a pint or two but stop nudging the damned table.

If you lift up your elk to move it to a stone, and it turns out that you are an idiot and didn’t judge the space correctly, your elk will fall helplessly into the water. Sploosh. Thus, you made yourself miss a go, presumably while your poor trusting elk scrambles back onto the rocks. Well done, and get better at judging distance next time.

The kinds of manoeuvres that you end up making are reminiscent of an old fashioned game of Jenga. But better, because it’s a race, and again because it features little wooden elk. There are some pretty tense moments when you’re hoping there’s going to be enough room on this stone for your elk, even though the other elky sod is already there, and that’s if you even reach it in the first place. Argh!

The game really is that simple. A few friends of ours argue that it’s actually an incredibly complex masterpiece, with strategies such as ‘always taking as many stones away from the other playing’, (being a knob) or only trying to hit your stones in a zig-zag pattern***. To which we say ‘That’s meta strategy, move your fucking elk please.’

When you’ve played a few times, you realise there are three stages to this game. The first is known as ‘the shaky start’. In this phase, neither player has quite got the hang of aiming or exerting enough pressure when flicking stones yet. Even if they’ve played before, perhaps that was about ten minutes ago and they’ve forgotten, or maybe they’ve had an extra beer. This results in a lot of stones pinging around in the first few turns, and usually a lot of swear words, or saying the phrase ‘I’ll do it better next time’. 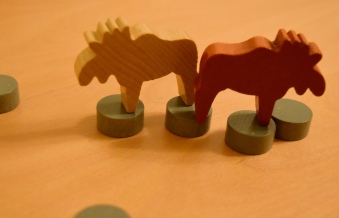 The second stage is known as ‘the ardgy-bardgy bit in the middle’. This is where each player’s elks are passing one another in the middle, and moving basically anything becomes tense and difficult. Often there is a lot of stone sharing for both elk, and things are both tense and cosy.

Finally, the last stage is known as the ‘just don’t fuck it up’ phase. This is where a player is within a few stones of the island they are hoping to get to. It’s amazing how easy it is to completely forgot how to elk when this happens. It’s also amazing how easy it is for your opponent to keep nicking the stones that you really needed to use to help you crush them.

But, eventually, an elk is crowned victorious. And then you will play it again, and again. You can even play is in hard mode by changing the length of the elk, or taking out some stones.

You will probably play it until you start thinking of nothing but elk. For instance,

‘Why is called Elk Fest? Is it a festival of elk?’

‘That can’t be right because there are only two elk on the table. And even if there were more than two I happen to know that many elk are referred to as a ‘gang’.’

‘Because I know that they’re also called Wapati. And knowing more about elk than you means that I will crush you.’

This is a great example of one of those lighter games that shouldn’t be underestimated. If you need something to play on a trip out, or a day at the pub, you should definitely find somebody who owns this game. It’s simple, it’s portable, and it’s not full of cards that are going to get blown away if you’re in someone’s garden. Become the grand elk master, which apparently in elk society just means someone who can cross over to an island really well. Thanks Kosmos two player series, you have successfully reduced all boredom felt at parties.

As ever the real winner is board games, but elk are probably right up there too. You go, you smelly mammals.

*So popular in fact that our friend Andy is the European champion at it three years running.

** Or at least Briony has spent a lot of time playing it at various events and trips to the pub after she bought a copy for her angry-punk boyfriend for his birthday a few weeks ago. He just can’t stop enjoying those elks.

***We are unconvinced about this tactic because it’s almost exclusively argued by people who just aren’t that good at aiming stones. A straight line forward to the other island is clearly what the pros are doing.