Pairs well with: Sacrificial human blood, but failing that a Bloody Mary.

The first thing Briony, or indeed anyone, learns about the game T’zolkin is that they don’t know how to pronounce it. T-olkin? Solkin? That Mayan game? So let’s go ahead and confirm that the correct pronunciation is in fact Z-olkin or tsol-kin. Oh the English language, you and your silent t’s are so amusing and whimsical. Furthermore we should probably confirm that the significance of the name lies in the fact that it represents a particular Mayan calendar and literally means ‘to divide days’.

The game board itself is made up of a series of connected cogs that are all linked to a big-ass central cog. At the end of each turn the central cog is turned once, and thus pulls each connected smaller cog around once also. The central cog represents a calendar year, with each linked cog representing a place or building – these feature a series of resources and/or actions a player may select. Your first few run-throughs of the game will almost certainly begin in the same ‘holy-fuck-the-cogs-look-epic, that-is-some-beautiful-engineering-right-there, I’ve-never-seen-a-board-game-do-this, it’s-so-well-themed (wipe away tear), why-did-I-never-have-an-appreciation-for-Mayan-cogs-before?’ way.*

Then, fairly swiftly, the wonder is followed by: Oh mother of god I can’t use these fucking things. Why did I never had an appreciation for forward planning before?

But don’t worry kids, you’ll get the hang of it. In fact the game has been designed in a way that suggests that they knew that people would often inadvertently try to ruin their own game. This means that there is very little negative scoring, and the cogs have some extra spaces at the end of their cycle which allows players to have a little more time to try and salvage their strategy. Similarly there is always an empty place to put a worker (yes, it’s a classic worker placement game) thanks to the four player limit. We noticed that compared to other resource collection games it really makes you feel like you have options, which sure is nice when someone else has just done what you had been planning for the past 7 turns.

Despite this it gets a fairly high Brutus rating as often someone selects the free cog position you really wanted, making you go somewhere else instead and naturally giving them the ol’ squinty evil-eyes. You also tend you lose track of when you need to take your workers off cogs and in what specific order, making your poor planning frustrating.

Pro tip about the game: So you probably saw the middle 15minutes of a documentary once, talking about the Mayans and corn, or swords, or the Spanish or something. You seem to remember something about sacrifice? Fortunately, the game doesn’t require actual historical knowledge **. In fact the game is one of those rare grey non-judgemental areas where players can say the stupidest assumptions ‘because they heard it somewhere once’. This will inevitably lead to consulting the interweb machine, and your merry band of gamers will be all the wiser for it.

‘I saw somewhere that the Mayans invented the recorder to help herd llamas, as they dislike the slightly hollow sound’

‘Oh really, Andy. I call bullshit. To the Google!’ 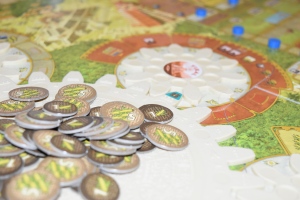 Carrying on, in a player’s turn they have the option to either place workers on the board, or to remove them. You can place or remove as many as you like in your turn. The workers are placed on grooves on a cog of your choice at the lowest possible space (usually the beginning tooth), and the idea is to slowly let your little Mayan chaps rotate around the cog until they reach the action or resource of your choice. This means that the game is hugely reliant on your ability to know how many turns it will be until you can take your worker off to achieve the action you want, and to extend that to all of your workers across the board on different cogs. We imagine this is loosely what it’s like to have a fleet of children and being expected to know where they are, what dietary requirements they have, and what they’re doing at all times. Respect to you parents out there, we find it difficult enough to simply identify which wooden piece is our own on a medium sized board of wooden pieces.

The sheer availability of strategies and combinations in this game is another reason that the team enjoyed it so much. Each cog, as well as representing a building/area, also has themed resources. This means that if the cog for the collection of corn and wood is mostly full you can turn to different cog for the same resources. In addition to the cogs there are also favour tracks, much in the same design as Caylus or Agricola. By moving up these you can get bonuses in different fields. These include taking extra corn on the corn/wood cog, getting extra resources from the resource cog, getting building bonuses if you build anything, going up temple tracks, and obtaining crystal skulls.

Crystal skulls are the no-fuss-victory-points option of the game. Only there is actually a lot of fuss in obtaining them. They’re a resource that is fairly difficult to get hold of seen as there is only one cog position that offers it aside from gaining them on the favours track. Despite that, there is an entire cog dedicated to the use of them. You can only use this cog if you have an elusive skull, and the longer you leave your Mayan chap on there, the more victory points and extra resources he can get you. When you take him off he has to leave a skull on his place on the cog. This means that eventually the cog fills up with skulls and no-one can use it to get more points. 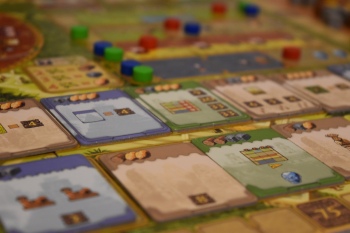 Several gaming buddies have so far pointed out that this is like that Indiana Jones film, you know, the fourth one that was all about the skulls. To them we loudly and clearly say, with our fingers in our ears, ‘La la la la la, you must be crazy, there are only three Indiana Jones films.’ 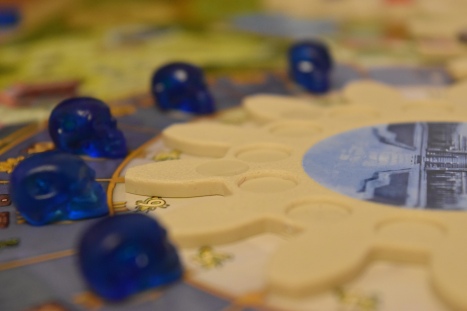 Moving swiftly on there is also a temple track to gain favour with the gods. Briony is currently very aware that she complained about the sheer number of components in Terra Mystica and is now very much praising T’zolkin despite it seemingly having a similar number of components. She still believes that T’zolkin offers a smoother interaction between all of its mechanisms, and therefore a better ability to combine various activities which still isn’t the case in Terra Mystica. She’s willing to admit that maybe she was a little hard on the game, but maintains that T’zolkin is still better. Maybe she just really likes taking part in the over-farming and human sacrificial culture of the Mayan’s, who knows. 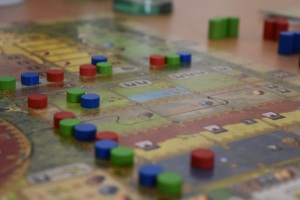 Finally, there are four marked teeth on the central cog. Each time these come along two things happen: Firstly each player must feed their workers two corn each in order to keep them alive, and secondly you obtain victory points and/or resources depending on how far up the temple tracks you are. This is pretty neat because it makes the presence of the temple tracks something more than a mechanism that only serves to boost your points right at the end of the game, and makes it worthwhile to use throughout. The only qualm we have with it is that the resource icon for gold looks suspiciously like a chicken nugget. We’re onto your cultural heritage Mayans, feeding a civilization with 24-piece boxes of chicken nuggets and then blaming the corn when everyone died. Very sneaky of you.

This also makes the building prices rather amusing: ‘4 chicken nuggets and some stone to build this yellow building… hmmm’

In conclusion we enjoy this game rather a lot. Great theme, great mechanics, an awful lot of corn. The uniqueness of the cogs really adds to the game, and the layout and versatility of the different parts mean that there are infinite and transferable strategies available at any one time. Briony strongly believes in maxing out all of the corn, and then using the yellow cog to build everything out of corn and corn alone while everyone else fights over some overrated shiny skulls. 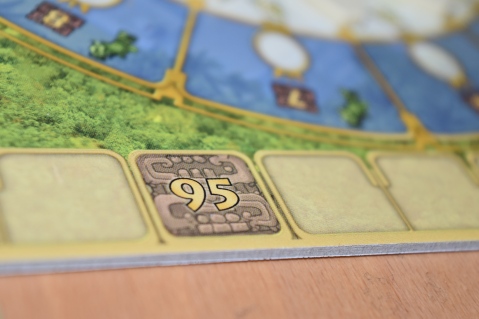 *Of course, we have seen similar cogs before. Or, to be more precise, similar wheels. Hello there, Glass Road!

** Bob, Briony and Lizzy pride themselves on knowing the colour of Edward Longshank’s socks on the 14th of August, 1247 – the point is we are history nerds. Well, nerds in general.

7 thoughts on “T’zolkin: Indiana Jones and the Kingdom of Plastic Cogs”